Curbside Wilmington Succeeds in Helping Local Restaurants During the Pandemic 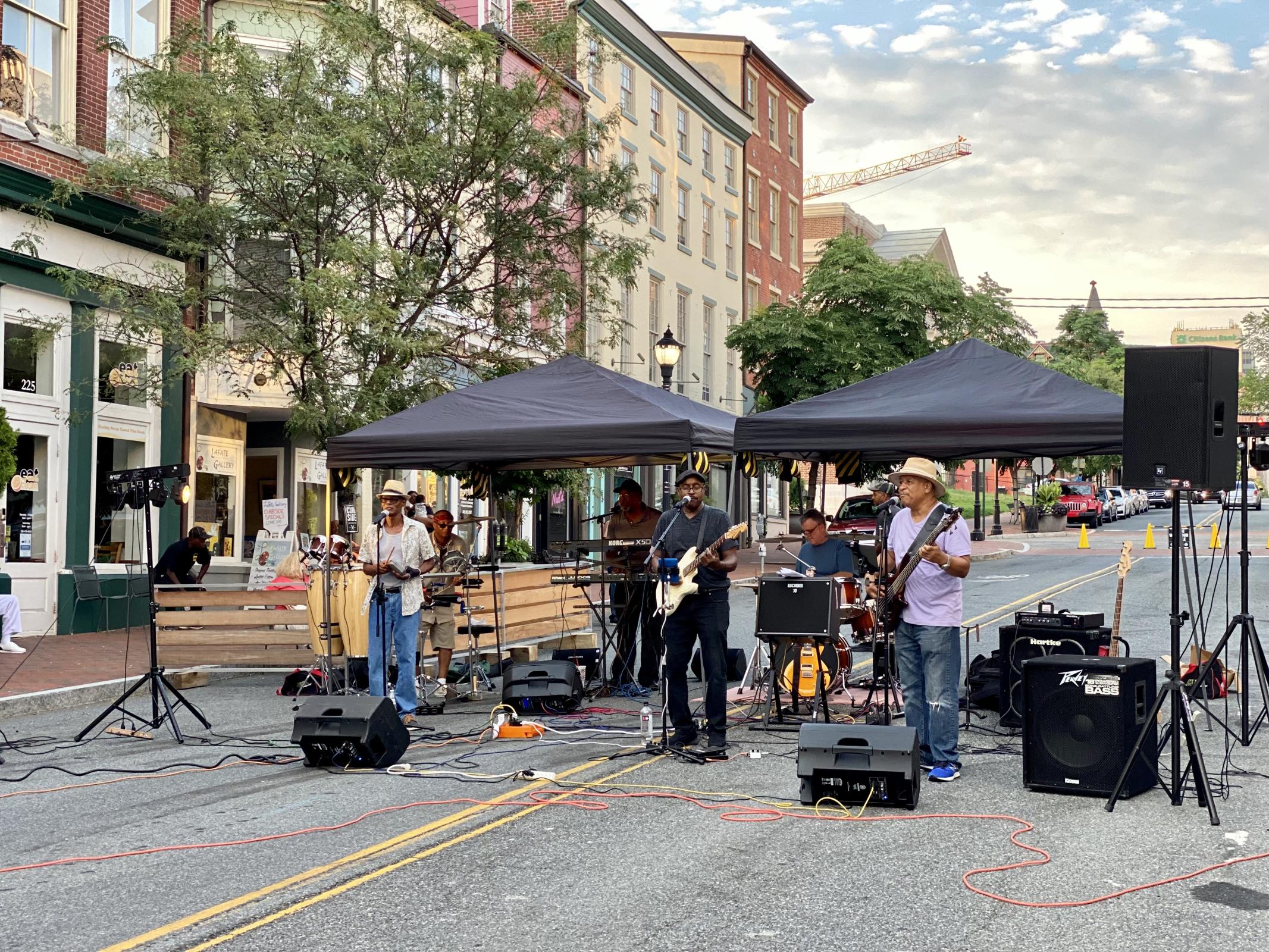 The pandemic has been challenging for restaurants everywhere. In Wilmington, Delaware, leadership took action with Curbside Wilmington, an initiative that was launched in September 2020 and continues today. Downtown Visions together with Mayor Purzycki, the City of Wilmington, and The Committee of 100 introduced expanded outdoor dining to support local businesses and encourage patrons to return to the rejuvenated Downtown District. Eateries were permitted to repurpose parking spaces directly in front of their businesses for use as dining areas. Curbside pull-in spots were also designated throughout the Downtown area for all businesses, both retail and restaurants, to use for pick-up and curbside delivery.

“This initiative would not have been a success without its partners,” said Schweiger. “The Office of Economic Development was vital in expediting the processing of applications and licenses necessary for expanded patios and alcohol sales. They were able to make sure that all of our restaurants Citywide received custom-made railings to ensure expanded outdoor spaces looked cohesive and attractive. They helped to maintain communications between the various City departments that were necessary for making Curbside Wilmington a success.”

“The Challenge Program is a fantastic local program that works with Delaware’s at-risk youth to provide skills needed to advance in the workplace,” said Schweiger. “They were very helpful in creating railings that worked for our restaurants’ needs, and the custom-made wooden railings offered a consistent look with a rustic esthetic that added to our Downtown environment.” 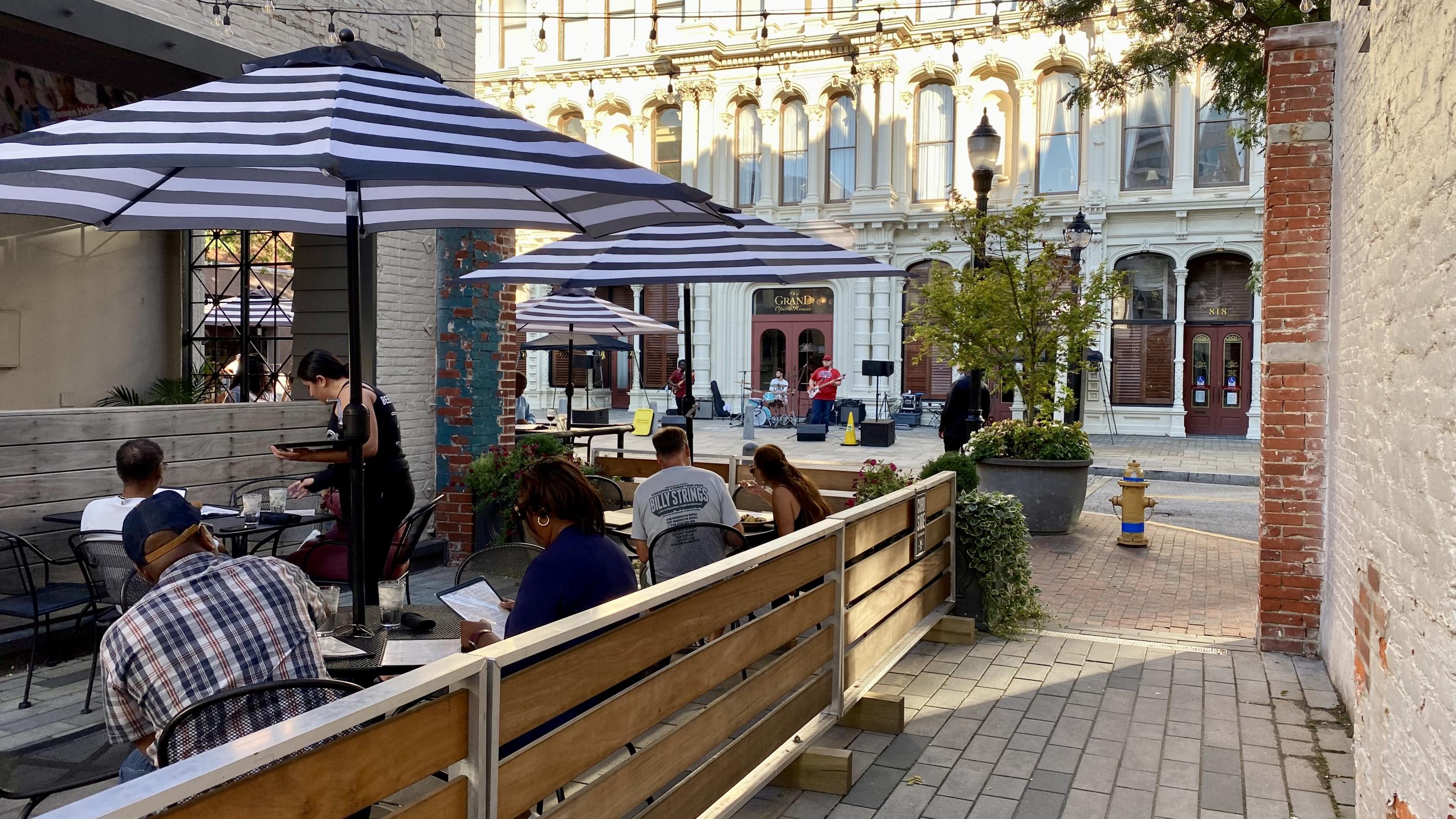 After the launch of expanded outdoor dining Downtown, the City expanded the initiative to include Union Street and Trolley Square’s Dining on Delaware through “It’s Time to G.O.A.T (Get Out Around Town)." The initiative included organizing and/or promoting entertainment series like live music, outdoor theater productions, quiz nights, and much more.

“Curbside Wilmington Happy Hours were part of the ‘It’s Time to G.O.A.T.’ campaign designed to bring the best of outdoor dining and entertainment to the City of Wilmington while working with our presenting sponsor JP Morgan Chase and partners,” said Schweiger. “The G.O.A.T. campaign brought all Citywide events together under one umbrella allowing marketing and promotions to reach a larger audience while maintaining consistency.”

“The mission of Downtown Visions is to create, manage, and promote a quality environment for people who live, work, and visit Downtown Wilmington,” said Schweiger. “Curbside Wilmington was a great example of the DTV’s mission in action and the Office of Economic Development’s leadership and participation in the effort was integral to the program’s success.”

Building A More Equitable Economy For Businesses, Workers, And Communities: A Conversation With Deputy Secretary Of Commerce Don Graves

Nov 22 2021
Covid-19 ravaged our economy and American businesses, workers, and communities are still working to recover. The crisis also further highlighted long standing inequities in our society, but also presents a key opportunity to build back better than before. Just last week, President Biden signed the Bipartisan Infrastructure Deal, and negotiation...Continue Reading

Nov 22 2021
Wilmington-based car-wrapping company Carvertise has moved into the entertainment marketing arena, and it’s turning heads — even in advertisement-saturated New York City. This month, a fleet of NYC Uber, Lyft and other Carvertise cars were wrapped with eye-catching ads for the ninteenth season of Bravo’s Project Runway, the hit reality sho...Continue Reading

Nov 18 2021
WILMINGTON, Del. – Governor John Carney, the Delaware Department of Agriculture, and the Delaware Council on Farm and Food Policy on Thursday announced a $2 million investment in seed funding to establish the First State Integrated Food System Program. This new program, which will be developed by the Delaware Counci...Continue Reading
Add to Report View Custom Report
Sign Up for our Newsletter